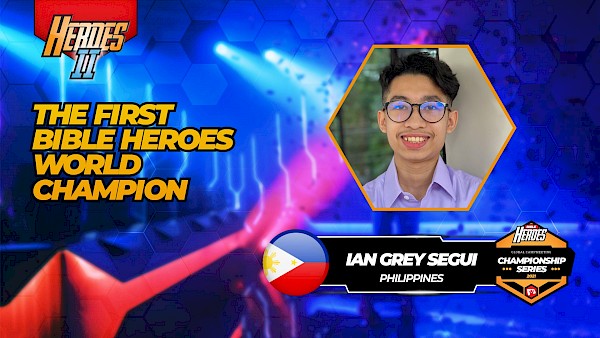 The final day of the Heroes II Bible Trivia Game World Championship is over, and Ian Grey Antoni Segui, 14 years old from the Philippines emerges as a champion among 16 finalists from around the world.

Segui won the best of three series in the finals against Canadian finalist David Jeffrey where Segui won the first and third rounds.

Ian Grey Antoni Segui together with his father, Greyson Segui, also a finalist, inched their way up to the finals beginning with the Union Level Heroes II competition.  From May 19-22, during the General Conference Global Virtual Camp meeting, qualifying rounds were initiated on four occasions to determine who will duel in the final round. After a thorough 4 days qualifying event, 16 names emerged on top: Alef from Indonesia, Karelys from Venezuela, Joseph from UAE, Freddy from Lithuania, David from Canada, Gaby from Ireland; Benjamin, Alexander, and Jose from Mexico; Andre, Vinicius, and Adrian from Brazil; and Ian, Greyson, and Chum from the Philippines.

Ian is a local of Lopez, Quezon, Philippines located 225 kilometers south of the Philippine capital Manila. He is the son of Greyson and Shyrell Segui, and an elder brother to Ivy Shy. He is currently in eighth grade studying in an Adventist academy in Lipa City, Batangas.

First Encounter to a Gaming App
In his fourteen years of existence, this is the first time that Ian was introduced to a gaming app produced and made by the Adventist church.  At an early age, Ian was encouraged by his parents to read the Bible, Spirit of Prophecy, and other Adventist resources instead of spending time in computer games.

Growing up, Ian competed in various Bible trivia quizzes in his church, school, and conference. He won Bible Quiz Championships in his 3rd and 6th grade, and a conference-wide championship for a Bible Spelling Bee.

In an interview, Ian’s mother, Shyrell Segui notes the impact of Adventist Education in Ian’s recent achievement. “Adventist Education helps a lot in reinforcing Christian behavior and ethics to our children. It is important that whatever we teach at home is in sync with what the teachers tell in school,” emphasized Shyrell Segui.
Ian’s father is grateful that a Bible trivia gaming app, designed with modern-day concepts, is created to reach out to millions of individuals in the gaming sector.  “This reveals to us that their people we need to reach out to through this medium. This is one way with which we can cater to their needs and introduce Jesus,” said Greyson Segui.

The Heroes II Bible Trivia App Experience
After he was announced as the world champion, Ian was overwhelmed by support and messages coming from people all over the world. In an interview, he said that he never thought that something this big will happen. He just wanted to play and interact with other players on the internet.

“Heroes II is not just a game but it is a tool designed to reach millions of young people. It is an app carefully designed to make its contents, interface, and objective closest to the Bible,” Said Ian Segui.

Ian’s achievement is an inspiration to other young people, showing them that at an early age, they can already know so much about the Bible if they only spend time reading it.  However, Ian wanted to encourage Heroes II gamers to not just focus on how to win the championship, but to know the Bible, and to have a deeper relationship with Jesus.

“This Bible Trivia Gaming app is just a tool and it should never replace our personal relationship with God and with other people.  Let us continue to know Jesus better by reading the scriptures.  Let us also use this medium to introduce Jesus Christ to others,” Ian reiterated.

Heroes Bible Trivia Gaming App and Its Journey
Heroes is a sequel to its pioneer version launched in 2013. The first version generated 10 million minutes of interaction. This resulted to the development of the modernized version of the app.  In March 2021, Heroes II was launched.

For more information about the app, you can visit https://www.heroesbibletrivia.org/en/
Heroes II: Bible Trivia Gaming App is also available on iOS and Android for download.