After taking the direct hit of a 7.2 magnitude earthquake on October 15, the central Philippines island of Bohol struggles to restore normalcy amid a death toll of 185 and the rubble of what were once churches, houses and roads.
Local authorities have suspended classes until Wednesday, October 23, to further ensure safety. Local businesses slowly began operating again in the capital city of Tagbilaran while the roadsides are strewn with make-shift tents housing displaced families and those fearful of returning to their homes due to the expected aftershocks in coming weeks. Although power has been restored to most of the Bohol municipalities, the priorities for quake victims who cannot return to their destroyed or damaged homes remain food, potable water, and shelter kits.
Pastor Ven Bermudez, publishing director of the Adventist church's southern Asia-pacific region (SSD), relates his experience at Kabawan, Maribojoc, Bohol where he conducted three baptisms days before the quake. After hearing about the devastation, Bermudez contacted the local church elder, Bro. Dodong Valoria and District Pastor Edwin Barcenas and learned that 14 Adventist families were displaced. A recent report from the local ADRA coordinator stated that several NGOs have already responded to the affected municipality of Maribojoc.
Travel remains a big challenge within the island of Bohol due to impassable roads and inconsistent communication services due to power outages. Although airports and seaports in Bohol and Cebu City are operational, on-the-ground communication, transportation and responses have been greatly affected. 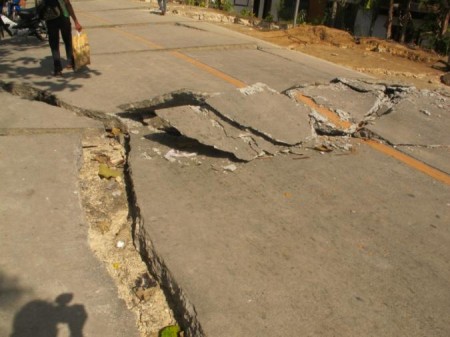 Shifted pavement on a highway after a 7.2 magnitude quake hit the central Philippine island of Bohol on October 15 with a death toll of 185. [photo by Moises Musico, ADRA-Philippines]

In spite of these obstacles, Pastors Eliezer Barlizo and Lelord Arranguez, president and communication director of the Adventist church headquarters in central Visayas (CVC), flew to Bohol with other CVC personnel to distribute 1800 packs of food, drinking water and medicine to aid 1800 families in the municipalities of Maribojoc, San Isidro, Antiguera, Inabanga, Tubigon and Carmen.  The relief operation is a combination of the CVC donation and the work of local Adventist church brethren in coordinating the purchase of goods, providing information and supplying four-wheel-drive vehicles to surmount challenging roads.
ADRA Philippines will be distributing food aid, taking into consideration the best alternative routes to deliver the goods to locations of greatest need starting on October 22. [Moises Musico & Gay Deles]