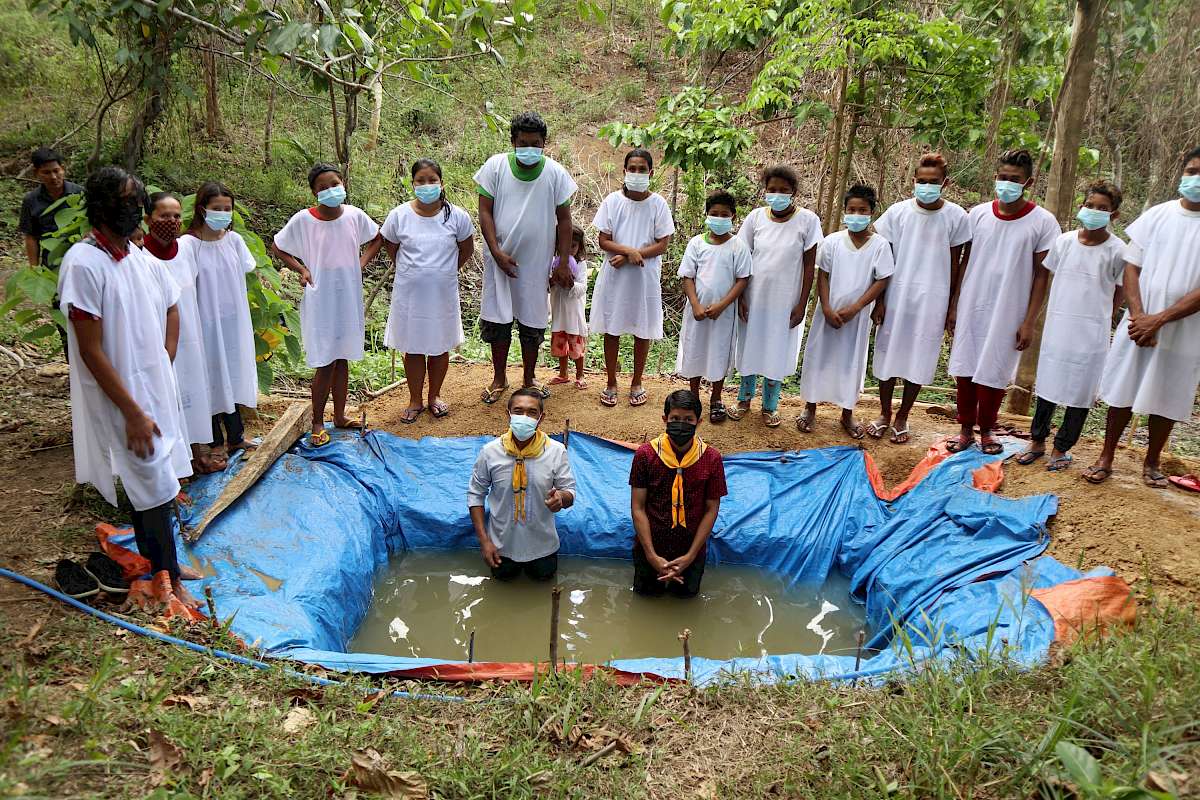 The story of the CLC Voice of Youth Ignite started when a group of young people did the groundwork for evangelism in the village of Kambubuyugan and Talamsi Uno in Bulacan last December 2020.  This story reveals the transforming power of God not only to the young people who participated in the evangelistic program but also to the people who accepted Jesus Christ as their personal Savior.  The program was initiated by the Youth Department of Southern Asia-Pacific Division headed by Pastor Ron Genebago, and by the NPUC Youth Department led by Pastor David Morado and as integrated into the training program of Central Luzon Conference Youth Department

Had it not been for the bravery and passion of our dedicated and committed young people who took charge of the Voice of Youth Team IGNITE certainly we would not have seen and heard testimonies of love and grace from individuals who have been freed from the grip of darkness through the transforming power of Jesus Christ.

With the inspiration and support of the local church leaders in the North Bulacan 3 District, the Voice of Youth team was organized and commissioned.  It followed what has been started by the groundwork group, and bravely shared God’s word to the people of Barangay Talamsi Uno from March 28 to April 10, 2021.  The young people braved through some of the most stubborn challenges they could ever meet in life:  there was no internet, no electricity, no water, and they must do their work under strict compliance to health protocols imposed by the government.

“I am so thankful that I became part of this VOY team which allowed me to use my God-given talent to share God’s love to other people,” shared Mart Louie Martizano of Camp Tecson SDA Church.

“Seeing twenty-one precious souls being baptized at the end of the VOY Ignite evangelism is so exciting and fulfilling.  It has never happened in my life before.  It’s such a joy.  I never regretted being a part of this very energetic VOY team,” said Orland Caliso, a church planter in the village of Kalawakan in Bulacan.

But the story did not end there.  Mauro “Mayor” Lopez, a chieftain of the Dumagat tribe in Kambubuyugan, together with his whole family have accepted Jesus through baptism in the Talamsi Uno VOY campaign.  After the baptism, Mauro could not contain himself.  He wanted to share the new truths he found with the members of his tribe in Kambubuyugan.  He pleaded with the VOY team to also do a campaign in his village.

“I want to share also whatever truths I have heard and accepted right now. I want to share with my relatives and with my tribe that God is love and He has no favoritism,” said Mauro.  “Truly, there were many religious groups that tried to persuade us, but I didn’t see and hear from them the biblical truths with a deeper impact as I did from the VOY team.  They have no qualms in dealing with us.  They are so sincere,” concluded Mauro Lopez.

The urgent call to launch another VOY Ignite Evangelistic meeting was happily accepted by our young people, but this time with a new member group, the Kambu boys of Kambubuyugan.  Kambubuyugan is translated as a place of many hornets, and the Kambu boys are known as the fiercest and the most troublesome youth group in the place.  They are known to disrespect anyone especially when they are drunk.  No other youth dared to stand in their way.  But their hearts softened, and they were baptized during the second VOY Ignite evangelistic meetings.  When they learned that another VOY campaign is going to be held in their place they got excited.  They enthusiastically presented themselves to be a part of the group.

“I am excited to share my new-found faith with my family and with my friends,” said William Gonzales, member of the “Kambu boys.” “There’s a different feeling inside me when I surrendered my life to Jesus.  Before, it was so natural to say bad words.  I did not respect anyone, and I was hot-tempered.  But thank God, I learned to become humble through the working of the Holy Spirit,” testifies Eric Bunag, another member of the “Kambu boys.”

So, from May 8 to 29, 2021 another VOY Ignite evangelism campaign was held in the village of Kambubuyugan in Bulacan.  The team included members of the Kambu Boys namely Mardison Lopez, Joven Lopez, Eric Bunag, Alberto Manansala, and William Gonzales.  Each member was given a specific task according to his/her talents during the whole duration of the evangelistic meeting.

The VOY evangelistic campaign had its light moments, too.  During the first night while I was sharing God’s word a water buffalo came up out of nowhere.  It created a slight confusion and fear among the crowd, but it turned to be a blessing because the attendees were now amazed that even a water buffalo wanted to attend the meetings.

A very tragic accident, however, visited one of the members of the Kambu boys.  On the last night of the evangelistic meetings, the family of Eric Bunag was in their vehicle going home.  While negotiating a climb the vehicle lost its brakes.  Two of Eric Bunag’s family members died.  It was sad news, indeed, but God works in mysterious ways.  The nightly vigil services were rendered by the VOY Ignite team.  More people heard our message.

To God be the glory!  Twenty-one precious souls were added to God’s kingdom during the baptism.  Though the team experienced heavy rains, hot weather, and many inconvenient situations God rewarded their dedication.   “I am really happy because my elder brother and his whole family are now baptized,” William Gonzales said.

“We are blessed and privileged to be part of this VOY team since our parents, Pastor Geronimo and Hazel Viernes are with us.  It is great to see the fruits of our humble contributions.  We want to join another VOY Ignite evangelism very soon,” the three Viernes siblings Florence Esther, Geronimo III, and Precious Hazel said in unison.

As of reporting time forty-two (42) precious souls had been led into the feet of Jesus by the Voice of Youth Ignite program.  Soon a decent church will be constructed on a piece of land donated by Mauro "Mayor" Lopez, the chieftain of the Dumagat tribe.  The success and accomplishment of our young people did not happen without the concerted support of our church leaders and church members who were convicted by the Holy Spirit to fulfill the Great Commission.