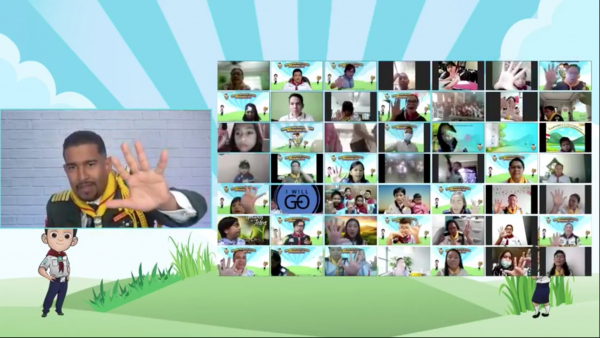 The Southern Asia-Pacific Division held the first-ever Adventurer Day on May 15, 2021, not only in the history of the Southern Asia-Pacific Division but also in the General Conference of Seventh-day Adventists as confirmed by Dr. Andres Peralta, GC World Pathfinder Director. More than 500 Adventurers and their parents registered and attended the virtual Adventurer Day hosted by the South Philippine Union Conference (SPUC) under the leadership of Pastor Jemsly Lantaya, SPUC Youth Director.  The historic day with its theme “Adventurer: I Will Go” was supported by all the 9 unions and two attached fields under the SSD territory.  Adventurers led the event. They prayed, memorized Bible texts, displayed their learned skills and honors, presided, sang songs, and reported their activities before and during the pandemic. To encourage church leaders Master Guide (MG) Merriam L. Torres, Adventurer Club Director of the Philippine International Church of the Adventist University of the Philippines, lectured on how to start an Adventurer Club in a local church.

“Children are arrows in the hands of the LORD,” MG Ron Genebago, SSD Youth Servant emphasized during his message.  “If they are properly trained and disciplined, they will be powerful arrows to target and bless the communities. However, if youth directors, parents, Master Guides, pastors, churches, and teachers failed to fulfill their duties, these children will become arrows to hurt their parents, their churches, their communities, and their countries.”  He encouraged them to synergize in their efforts to disciple the next generation of young people.

Using 2 Samuel 4:4 as his key text, MG Andres Peralta shared the story of an adventurer who became lame when he was 5 years old. He was referring to Mephibosheth, son of Jonathan, and grandson of Israel’s first King, Saul.  He related that Mephibosheth had everything in life, but because of war he lost his father and grandfather.  Mephibosheth was scared.  He thought he had no value.  But he found mercy and love in the eyes of David, the new king. David said that he would give to him what he had lost, and that he would eat with him in the king’s table. “If you feel lonely, adventurers, if you are afraid, if people are saying that you are not valuable, remember that Jesus has invited you to His table. He wants to spend time with you. Say, dear adventurer, I will go to Jesus.”