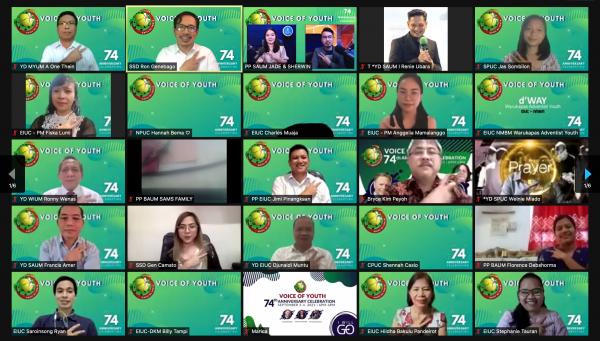 The Southern Asia-Pacific Division (SSD) celebrated the 74th anniversary of the Voice of Youth (VOY) initiative on September 3-4, 2021.  The SSD Adventist Youth Ministries launched the VOY witnessing program to motivate young people to proclaim the Three Angels’ Messages to their local communities through small teams of 12 young people.  The initiative trained the young people on how to conduct VOY campaigns and provided resources to make them effective disciples of Christ.  To date, SSD has organized 1,191 VOY Teams, out of which 905 have successfully held their physical, virtual, and hybrid VOY meetings.  Through the guidance of the Holy Spirit, the commitment of the young people and the youth directors, and the fervent prayers of 908 organized prayer networks, the VOY teams have gathered 8,006 new disciples.

The celebration commenced with a united prayer session led by Genesis Camato, SSD Prayer Coordinator.  Then the Unions and Attached Missions shared their video reports which included testimonies from their VOY team members and newly baptized members.

Pastor Mark Finley, a renowned evangelist and retired General Conference (GC) Vice President preached extensively on the First Angels’ Message.  He emphasized, “For Seventh-day Adventists, the Three Angels Messages in Revelation 14 is our rallying point. They define who we are as a people and describe our mission to the world… We are a movement raised by God to prepare the world for the coming Jesus.” He went on to reiterate that there is no work of greater importance that should absorb the attention of God’s people.

Pastor Gary Blanchard, the GC youth director, preached passionately on how important young people are in the spreading of the Gospel.  He declared, “Young people are arrows at the very center of the mission of the Seventh-day Adventist church to take the Three Angels’ Message around the world… Arrows sent by the warrior to the most dangerous places of the Earth… Arrows that are fast, focused, and fearless.”

Pastor Baraka Muganda, former GC youth director, delivered the commitment message.  He declared that even after 74 years, the VOY initiative is still so effective because God has blessed this ministry. He went on to say, “When young people are involved in evangelism even the devil is scared.”  He then challenged the youth of SSD to change the world.  “I want you to put salt into the lives of people, I want people to feel the zeal of Jesus Christ when they see you… We are called to make a visible impact on the world around us.”

Pastor Samuel Saw, the president of SSD acknowledged all the efforts of the VOY teams by saying how refreshing it is to see young people committing themselves to the mission of winning many souls, especially during these challenging times. He expressed, “God will continue to give us wisdom as long as we seek ways and means and depend on Him, God will continue to use us.”

Dr. Bievenido Mergal, NDR/IEL Vice President, appreciated the youth directors, local church youth leaders, and young people for their wholehearted support to the ministry of evangelism. He continued to say, “Young people your contribution to the mission of the church is invaluable and beyond compare. Remember you are the future of the church.”

The Union youth directors together with their counterparts in the Conferences and Missions shared encouraging messages with the young people who were gathered.  Pastor Francis Amer, youth director of Southern Asia Union Mission (SAUM) expressed his support by saying, “It’s a challenging time to conduct these VOY meetings, but with the grace of God we were able to move forward with it.”

Pastor Von John Sanchez, youth director of the Central Philippines Union Conference said, “The VOY program is God’s ordained work for the church. Our young people have been motivated by God to push forward and campaign for the advancement of God’s kingdom through the VOY Ignite.”

To address the newly baptized members, the Union Youth Directors held a panel discussion on how to disciple new members. They each shared their views and advice with the newly baptized members. Pastor A One, Myanmar Union Mission (MYUM) Youth Director said, “Baptism is not the end of the ministry, it is just the beginning.”  Pastor Francis Amer agreed by saying, “Nurturing is not an easy task, but it is necessary.” Pastor Dave Morado, Northern Philippine Union Conference Youth Director shared that the newly baptized members need to be accepted no matter what background they have, or where they came from.  Pastor Petronio Genebago, SSD youth director contributed to the discussion by saying that the new converts need to expect and brace themselves for the many trials and disappointments.  He encouraged them to look to Jesus, not to pastors, elders, and members of the church.

Pastor Genebago introduced the VOY EXPAND for the year 2022, where the teams are to focus on Exponential Advancement through Nurturing and Discipleship (EXPAND). Pastor Genebagos’ comprehensive plans and the encouragement from all the speakers and the youth themselves is an indication that the VOY initiative will continue to be a great asset in saving souls for Christ.

Shehoney Simbajon, a youth from the southern Philippines and who was a speaker in her VOY team related, “The VOY initiative allowed me to share the Lord’s message to people who were not yet in the truth while serving Him and His people. It gives me strength and joy in the ministry, and I would love to do it again.”

Anna, a Youth leader from Ho Chi Minh City, Vietnam, expressed, “2021 has been a difficult year due to the pandemic and as one of the leaders I was stressed out. When the VOY started it was like a microwave oven that warmed me up.  It gave me the hope that there is always a way if we trust in the Lord and think positively.”

Barsharit Masih, a VOY member from the Pakistan Union revealed, “When I heard about VOY it was something new for me, a new kind of activity. I was not familiar with it but when we took part in the first session, I understood its true purpose and how VOY works. By God’s grace now we are journeying towards achieving something and working together with our youth.”