During the October 15, 2013 Annual Council, a yearly gathering of world-wide Seventh-day Adventist church leaders, church growth and the evangelistic efforts within the Southern Asia-Pacific Division were highlighted.

One of the brightest spots in rising membership in 2012 occurred in the Southern Asia-Pacific Division, which reported the fastest growth rate, at 7 percent.

Southern Asia-Pacific President Alberto C. Gulfan Jr. told ANN that most of the growth is occurring in the Philippines, which is undergoing a neighborhood-based evangelism campaign that is being credited for some of the 80,000 baptisms since 2011. 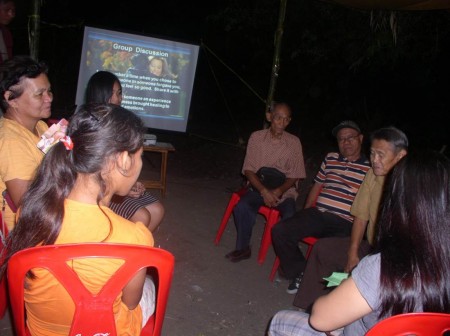 The Integrated Evangelism LIfestyle program as shown here in the central Philippines is credited with increasing church growth in the Southern-Asia Pacific Division. [photo by Virgie Baloyo]

The care-group ministry program, called Integrated Evangelism Lifestyle, consists of an Adventist family praying for a family in their neighborhood, and inviting the family to a weekly study of health principles, family life matters and, later, Bible study.

"It's catching fire," Gulfan said. "We are seeing that in South Philippines, where the growth is fastest and largest. It's because they have strongly implemented the program of the Integrated Evangelism Lifestyle." [Edwin Manuel Garcia/AND]