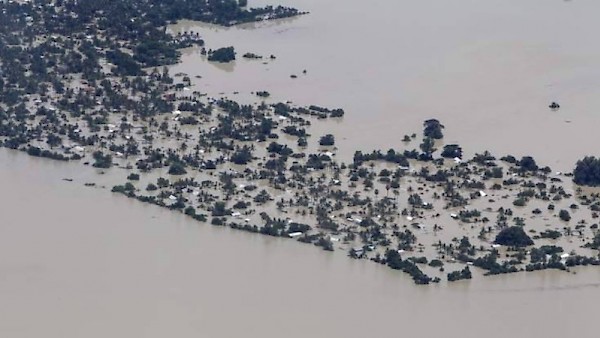 An aerial view of one of the flooded areas in Myanmar due to heavy rainfall and a recent cyclone. (photo supplied by ADRA Myanmar)

This week Adventists in Myanmar continue their assessment and relief activities in the flood-affected western areas of the country.  Recent heavy rainfall combined with high winds and rain from a recent cyclone have caused flooding in four western areas, leaving 27 dead and more than 150,000 affected according to current news reports. These statistics up the overall death toll over the last six weeks to 46 with a total of more than 200,000 affected throughout Myanmar.

In response to this latest development, the Seventh-day Adventist church began its relief efforts last week in Rakhine state, a region stretching south east of the Bangladesh border and along the Bay of Bengal. The Yangon Attached District (YAD) administration there worked with Adventist Community Services (ACS) to distribute food items to approximately 500 disaster victims according to Ler Hser, YAD treasurer. Ten area churches have been partially destroyed by the wind and floodwaters with one being completely flooded.

Heavy rainfall and landslides damaged portions of Hakha, the capital of Chin state in upper Myanmar. Residents were warned to evacuate with more than 1,000 homes vacated, reported Mrs. Pun Khar, the wife of the district pastor.  A makeshift rescue camp has been set up to accommodate them. The main road to this state capital has been destroyed and thus it has been difficult for government and other rescue and relief teams to reach the area.

In central Myanmar, church leaders note that house churches were partially destroyed by the flooding but in spite of this, they are focused on helping their communities. In addition, one of the nation’s top non-government organizations (NGO) is requesting health care assistance from the Adventist church’s relief teams. In response, Tha Tun Aye, Central Myanmar Mission treasurer, said that “the church is ready to start relief activities especially health care. We are coordinating with the ACS coordinator in Myanmar Union to send medical doctors and health workers to the disaster affected area.”

Pastor Rozama, Upper Myanmar Mission executive secretary, reported that more than 134 families of church members were affected by the flood in Chin state and Sagaing Region. A total of 22 churches in the area remain flooded since last week. Members and leaders are waiting for the waters to recede so they can assess the damage.

ADRA Myanmar is also lending their valuable expertise in this affected north-western part of the country. With input from church pastors and elders in the Kalemyo area of the Sagaing Region, ADRA Myanmar is coordinating a joint emergency response with government and NGOs. The focus will be on filling unmet needs and/or gaps in support.

“ADRA has an initial response of USD 15,000 that is activated within 24 hours once a clear coordinated emergency response plan is in place and will include emergency food and clean drinking water supply for flood victims,” notes Brendon Irvine, ADRA Myanmar country director. “A larger ADRA International Network response of up to USD 50,000 is also planned once clearer details emerge of ongoing needs, which [could] possibly include [the other] areas,” he adds.

In Hpa-an, the capital of the Kayin state, ACS volunteers will provide food items to the 2,000 displaced people in rescue camps.

With more monsoon rains predicted this week, the Adventist church in Myanmar is prepared to continue its relief work and bring the comfort of Christ to those in crisis.