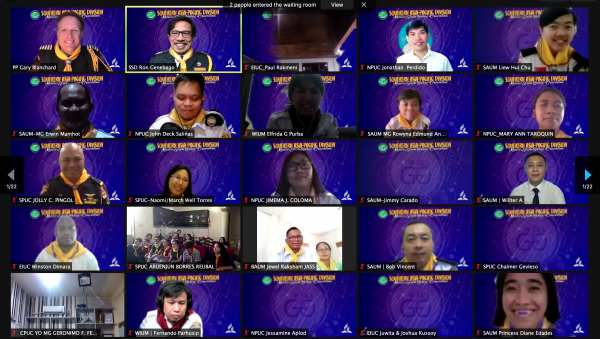 Over a thousand Master Guides (MG) and Master Guide Trainees in the Southern Asia-Pacific Division committed themselves to support the “I Will Go” initiative of the Seventh-day Adventist Church on April 23-24, 2021.  The youth leaders gathered virtually via Zoom and Facebook in a division-wide online leadership and discipleship training.  The said convention had 2,167 registered participants who quickly filled the 1000 Zoom attendance limit during the opening night.  It had a sustained 900 plus attendees throughout the next day.  During the Sabbath sessions, Facebook Live registered more than 11 thousand views at the start and more than 6k the following day.

General Conference Youth Directors MG Gary Blanchard, MG Pako Mokgwane, and MG Andres Peralta graced the convention and uplifted the attendees with their messages.  They also challenged the youth leaders to support the “I Will Go” initiative of the church. They also briefed the trainees on the updated Adventurer curriculum and the plans of the Master Guide worldwide program.

MG Pako noted the unprecedented number of attendees during the convention: “I have never attended a live meeting that has more than 200 people.”  In his message, he encouraged all Master Guides to pray fervently, fast, and focus on their relationship with God as Jesus did. He also invited them to study, memorize, and meditate on the Word of God diligently.

MG Samuel Saw, SSD President, in his commitment message before the convention ended reminded the Master Guides on the statement of Henri Nowen: “The greatest obstacle to loving God is serving God.”  He observed that more times are spent in committee meetings, replying to emails, and other matters; but little time is spent in reading the word of God, in praying, and in listening to Him. Master Guide Saw pointed them to look at Jesus who never failed to spend time with His Father despite His busy ministry. He emphasized: “Loving God is more important than serving God.”

In a response, MG Vanessa Fredeluces, in an email sent after the event says: “Thank you so much, Pastor! I have learned a lot, and I am challenged to do my part as one of the Master Guides of God.  I love how we prayed a lot during the whole program. May the Good Lord continually bless you and the whole MG family.”

MG Osvald Taroreh, from the West Indonesia Union Mission, shared: “What I liked most from the convention is that in every country, MGs and Pathfinders keep doing the mission despite the pandemic as shown in the video reports. The convention also provided us answers to pertinent questions on our clubs.”

MG Jimi Pinangkaan from East Indonesia Union Conference shared what he learned during the convention. He chatted on Messenger: “Be an example by reflecting a Christ-like character, and by serving the church and the communities...”

MG Francis Amer, Southeast Asia Union Mission Youth Director and the host of the convention commented: “[This] MG Convention is indeed an eye-opener to me as a Union youth director to see that MGs in SSD are committed and dedicated to serving with the theme ‘I Will Go’ even during this challenging time by stepping higher into the new normal of doing the work for our youth.”

At the end of the program Master Guides all over SSD flooded the Zoom chat box with the phrase “I Will Go!”