Over a week has passed since 15 ft high tidal surges from typhoon Haiyan knocked the city of Tacloban, Leyte to its knees, claiming thousands of lives and leaving survivors in dire need of food, water, shelter and hope. Haiyan further submerged towns in northern parts of the islands of
Panay and Cebu, cutting communication lines and concealing victims beneath the debris. Some Filipinos in unreached towns walked long distances to find places where they could charge their phones and reconnect to the outside world; others, without that advantage, still wait and hope to be reached as limited provisions dwindle.
While pictures of the devastation circulate the internet, survival stories yet remain to be heard and recorded. Adventist members all over the world not only ask for news on the extent of the damage but how the churches in affected areas survived the Typhoon. To meet that need, the SSD Communication department has compiled a brief overview based on the latest reports from the affected areas.

Agapito Catane Jr, president of the Adventist church headquarters in central Philippines (CPUC),  reports that "the CPUC Administrative Committee formed a Disaster and Relief Operation Structure and the three Adventist hospital presidents in Cebu, Calbayog and Bacolod will serve as coordinators for medical aid in affected areas. In the evening of November 16 we sent a vehicle with five containers of diesel, tools and other supplies. We assigned an L300 van to the East Visayan Conference (EVC) in Tacloban so that they can more easily mobilize their teams and reach the most needy families. On November 19, the Adventist Emergency Rescue Unit and medical team from Bacolod are going to Tacloban. Trans-Asia Indonesia, a shipping company, will leave for Tacloban on November 20 and we are loading two to three vehicles with rice and canned goods for the trip.”
Catane was grateful for the urgent desire to help that he saw in international and local volunteers. “Workers from the Adventist Development and Relief Agency (ADRA) International-Germany and volunteers traveled to northern Cebu to distribute relief goods. From there they met ADRA Philippines personnel in Ilo-ilo to continue the relief operation there,” notes Catane with appreciation. 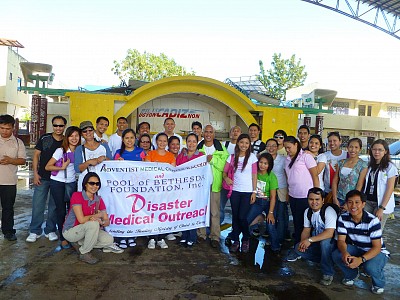 After a relief operation, a disaster response team from Bacolod Adventist Medical Center pose in front of the stage of what used to be a covered court/gymnasium in Cadiz City, one of the places hit by Typhoon Haiyan with its fast winds tearing apart houses and buildings on November 8 (Photo provided by Jo Anne Amparo)

The Bacolod Adventist Medical Center (BAMC) raised funds for rice and canned goods for EVC. Staff member Jo Ann Amparo traveled with the BAMC disaster response team as part of The Pool of Bethesda Foundation Inc. to Cadiz, north of Negros Occidental. She noted in her Facebook post that they were blessed to give relief goods and words of encouragement to those in the typhoon-affected area nearest Bacolod. 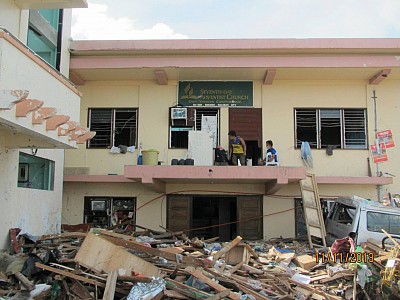 The Adventist church headquarters in east Visayas located in Tacloban surrounded by huge piles of debris in the aftermath of typhoon Haiyan that hit the city on November 8. Church leaders & members now try to clear the area surrounding the office to provide a place for relief operation. [photo by Luna Casio]

The EVC office grounds are being cleared in order to provide a center for relief operations and medical assistance. The process is slow because Adventist members are also trying to save the remains of what were once their homes near EVC.

In Ormoc City, the province’s second largest city located approximately 105 km from Tacloban, “two thousand Adventist families are homeless and twenty-four churches in the district were damaged by the storm,” according to church member Trexi Ann Bayeta. “Debris on the roads is now cleared but power lines are still down. Food and water are still scarce, especially in the remote areas and medical aid is needed.”
Ormoc city remains one of the lesser served areas. Your monetary donations can make a great difference to the Adventist church members and others there. If you wish to help in this way, you may make a donation to ADRA Philippines at www.adra.ph/donate.We may also provide you with communication assistance if you wish to reach out to a local Adventist pastor or know the situation of some of our church members there by contacting the SSD Communication office at +63 46 414 4079 or email gdeles@ssd.org
If you would like to contact the Central Philippine Union Conference of Seventh-day Adventists, the headquarters is in 112 Gorordo Ave., Lahug, 6000 Cebu City with telephone numbers +63 (32) 412-2100 | Telefax +63 (32) 412-2043 or make bank donations: BANCO DE ORO (BDO): Name: Central Philippine Union Conference Dollar Account: 6090062234 SWIFTCODE: BNORPHMM - ATTN: Mr. Elmer Manatad, CPUC Treasurer
[Gay Deles/AND]