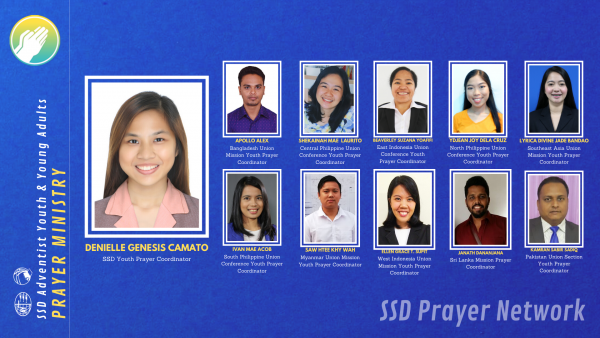 To embrace the prayer revival brought about by the 100 Days of Prayer initiative, the Southern-Asia Pacific Division (SSD) Adventist Youth Ministries (AYM) Committee has voted for the organization of prayer networks. The prayer network is an aggregation of Seventh-day Adventist young people distributed in 14 countries within the SSD territory whose goal and activities are to pray for each other, to embrace a prayerful life until Jesus comes, to emulate Jesus Christ’s prayer lifestyle, to intercede for the church’s ministries and mission; and to invite all young people in SSD territories to join the prayer network.

In its regular meeting on June 5, 2020 via Zoom, the SSD AYM Committee approved the creation of the AYM Prayer Ministry that will oversee the creation and activities of the prayer networks throughout the Division territory. The AYM Prayer Ministry envisions to strengthen the prayer life of young people. It is tasked to inspire the youth to develop a close relationship with Jesus.

The organization of the Union level Prayer Networks started at the Southeast Asia Union Mission (SAUM) on May 29, 2020, and was completed on June 19, 2020, at the Central Philippine Union Conference (CPUC).  As of this writing, all the nine (9) unions and some of the missions/conferences in SSD where prayer networks have already been organized are taking the lead in impressing the prayer habit among the young people in their territories. The aim is to have a youth prayer network in each local church.

The following is the strategy for the Youth Prayer Ministry:

The formation of the prayer ministry teams has followed several steps, which include:

Pastor Roger Caderma, the Southern Philippine Union Conference (SPUC) president, in his opening prayer during the SPUC Prayer Warriors and Youth Directors Fellowship on June 6, 2020, prayed for God’s blessing on the formation of youth prayer fellowships.  In his prayer, he tagged the youth as “not the church of tomorrow but they are the church of today”. After which Pastor Jemsly Lantaya, the SPUC Youth Director, welcomed the young people who were on ZOOM and Facebook Live to the first-ever youth prayer warriors meeting on ZOOM in his union.

Pastor Milton Das, Bangladesh Union Mission Youth Director, shares, “Our people are assured that there are prayer network teams who are praying. They are excited to pray because of the prayer network. They are requesting more and more prayer fellowships.”

Kamran S. Sadiq, Pakistan Section Youth Director, relates, “We see people gathering in homes for prayers and worship more regularly than ever. There is a sudden change in the atmosphere. Prayer has brought changes in the attitude of many people. The youth are praying for those who are in need.”

Beulah Vidayo, a Prayer Network leader from the North Philippine Union Conference testifies, “Through the prayer network organization, our Central Luzon Conference young people are enjoying more the privilege of praying. Not just because it feels good to talk to God and surrender everything to Him, but also because it feels good to pray with a group or at least with a partner. Through prayer network, we have fellowship with God, and also with other youth.  We are blessed and amazed by how God answers prayers. I have personally experienced God’s miracles in so many different ways, and I am blessed by the reminder: ‘whatever you ask in prayer, believing, you shall receive’ (Matthew 21:22).  “For with God, all things are possible” (Matthew 19:26).  Now, I am moved to help other young people to experience claiming God’s promises through this Youth Prayer Network.”

During the first fellowship of the SSD Prayer Network leaders, Pastor Jonathan Walter, Media and Communications Manager for Ministerial Association of the General Conference, appreciated the participation of SSD young people in intercessory prayer. He said, “It’s a huge blessing to be connected with you, SSD prayer group that is starting here amongst a lot of young people. I am so thankful for you, for participating in this important work of intercessory prayer, united prayer. We in the General Conference believe that ‘Prayer is the key that will bring revival and reformation to the world.’”

The SSD AYM has been actively promoting the prayer initiative of the World Church as part of leading its youth to fulfill the department’s Vision 2020 which is: “Healthy young people who are enjoying a saving relationship with Christ, loving the Scriptures as their standard of living to reflect a Christ-like Character, passionately serving the Church and Communities using their God-given spiritual gifts, and vigorously fulfilling the gospel commission in the power of the Holy Spirit.”